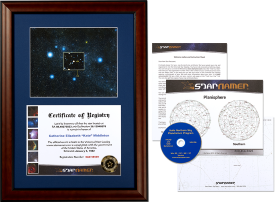 I have been in the business of assisting people name stars for their loved ones for about twenty years and have named about 150,000 stars for people. However, commercial star naming companies have been in existence since 1978. Star naming is not a fad. People have been naming stars for as long as history and they will continue to do so.

Star naming companies exist for two major reasons. The first is that people love the idea of naming a star for someone. The second is that the scientific community, represented by the International Astronomical Union, does not name stars for individuals for a fee. When you have a consumer demand that is not met by a community, then commercial interests will step in to meet that need.

Star naming companies have voluntary disclaimers on their web sites telling people that commercial star naming is not affiliated with the scientific community. In this way, star naming companies tell people that naming a star through their facilities is not an act that will be recognized by any government or scientific body. Many companies state that to name a star is a novelty gift. But the consumer is not dissuaded. They keep naming star after star. On many occasions we have had someone propose marriage by naming a star after their loved one. The fact remains that the majority of people interested in naming a star are not dissuaded even though they are well informed and know that commercial naming a star is not an official governmental act. And, of course, everyone knows when you "buy a star", you don't really own it. That is just a figure of speech.

Is star naming a fraud, a scam or a swindle? The International Astronomical Union would have you think so. However, their star buying FAQ hints at their real problem. They call commercial star naming "charlatanry". This shows they take affront to commercial star naming companies usurping their "semi-official" status. In the IAU FAQ on buying a star, they have a question "Who is legally responsible for naming objects in the sky?" And, their response is "The IAU is the internationally recognized authority for naming celestial bodies..." This is VERY misleading! They have no legal authority. Further, just because many (but not all) scientists recognize their authority, that does not give them "official" status. Who gave the IAU the right to name stars? No one! That's right, the IAU is a self appointed arbiter of star naming. And, when they do name a celestial body, it is done by a very small committee. Their, decisions can be hotly disputed even in their own community. For example, when one small committee decided that Pluto is no longer a planet many scientists were up in arms. As far as their legal authority, under space law, nations signed the Outer Space Treaty of 1967 under the auspices of the United Nations. If the IAU had the legal right to name stars, the United Nations would have given it to them. But they didn't and they won't as the United Nations believes that space is "the province of all mankind" and not to be monopolized by any nation or organization. The IAU is an organization of 73 member nations. There are over 190 nations in the world. So the IAU doesn't even represent a majority of nations in the world. The IAU doesn't like their toes being stepped on. They would have you believe they are the real doctors and commercial star namers are fake doctors. This is just a naked power grab. In addition, they don't name stars for individuals for a fee. They don't give the people what they want. So they remain in their ivory towers and leave it to the commercial interests to take care of the people needs. The worst part is they prefer to imply people are naive or stupid for wanting to name stars in the first place. In my opinion this attitude is the height of arrogance.

Star naming companies try to make the experience as real as possible. Some publish the names in a copyrighted book. Some show the star names in an on-line registry. These companies take pains to preserve the customer's star names by backing up the name servers in multiple redundant ways. Some companies even launch the star names and loved ones photos or messages into space on rockets!

And here's an interesting point, when some non-profit decides to raise money by naming stars for people, some astronomers fall all over themselves to post links to them on their web sites bashing commercial star naming services. These non-profits are no more official than the commercial sites. This implies that what really irks those astronomers is not that commercial sites are not official but that they name stars at some small profit!

All in all, commercial star naming is a very affordable way to show that special someone that you love them. It's like a greeting card on steroids. I think the astronomers that are up in arms about commercial star naming need to take a chill pill and let people have their fun. And if you want to purchase a star for your loved one, simply search the term "name a star" on your favorite search engine.